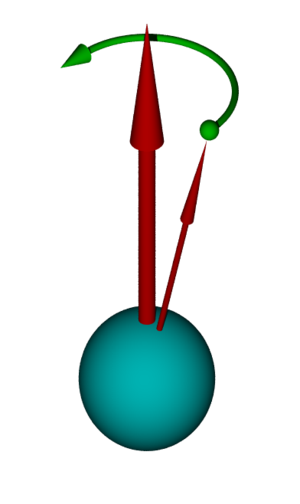 Direction of precession for a negatively-charged particle

is the magnetic dipole moment,

is the angular momentum vector,

is the external magnetic field,

symbolizes the cross product, and

is the gyromagnetic ratio which gives the proportionality constant between the magnetic moment and the angular momentum.

precesses about the external field axis with an angular frequency known as the Larmor frequency,

is the angular frequency,[1]

is (for a particle of charge

) the gyromagnetic ratio, and

is the magnitude of the magnetic field[2] and

is the g-factor (normally 1, except in quantum physics).

is the Larmor frequency,

is the charge, and

is applied field. For a given nucleus, the g-factor includes the effects of the spin of the nucleons as well as their orbital angular momentum and the coupling between the two. Because the nucleus is so complicated, g factors are very difficult to calculate, but they have been measured to high precision for most nuclei. Each nuclear isotope has a unique Larmor frequency for NMR spectroscopy, which is tabulated here.

The above equation is the one that is used in most applications. However, a full treatment must include the effects of Thomas precession, yielding the equation (in CGS units):

is the relativistic Lorentz factor (not to be confused with the gyromagnetic ratio above). Notably, for the electron g is very close to 2 (2.002..), so if one sets g=2, one arrives at

is four-acceleration. This term describes Fermi–Walker transport and leads to Thomas precession. The second term is associated with Larmor precession.

can be neglected, the particle's translational motion is described by

The BMT equation is then written as [4]

The Beam-Optical version of the Thomas-BMT, from the Quantum Theory of Charged-Particle Beam Optics, applicable in accelerator optics [5] [6]

A 1935 paper published by Lev Landau and Evgeny Lifshitz predicted the existence of ferromagnetic resonance of the Larmor precession, which was independently verified in experiments by J. H. E. Griffiths (UK) and E. K. Zavoiskij (USSR) in 1946.

To calculate the spin of a particle in a magnetic field, one must also take into account Thomas precession.